The Patriot Javelin slugs have been ‘shot’ to all corners of the globe and have recently been announced to the public, much to the excitement of the airgun community – But there’s way more to this story than what meets the eye. WAY more. We’re not going to force marketing blabber in your face, but there’s a really interesting backstory to this project that is worth hearing if you’re interested in the idea of shooting slugs out your PCP airgun.

Believe it or not, this project has been in the pipeline for a number of years already. You may already know this, but although slugs are not a new concept to the world of airguns (big bore shooters have been using them for many years), the concept of shooting smallbore slugs at relatively low muzzle energies is something that seems to have exploded out of nowhere in a very short space of time. But how did this phenomenon start, and who is responsible for the meteoric rise in slug popularity?

Smallbore slugs didn’t suddenly appear out of nowhere. They have actually been around much longer than many people realise. Many people have been experimenting in their garages and testing new designs over the past decade or two, and these people are the true pioneers – It was them who did the initial digging for ideal diameters, lead formulas, ogive shapes, base profiles and weights – However, in late 2017 a number of factors seemed to come into perfect alignment and began to create the ideal platform to launch slugs to the mainstream market.

Why were slugs not ‘mainstream’ earlier? Well the biggest factor is that there was (and still is) no standardised barrel diameter & profile. So it wasn’t as simple as going out and buying new bullets for your .308 Winchester. A .308” bullet will be built for a .308” barrel which is built perfectly to spec, but a .22 airgun is not actually .22! Groove diameters vary from 5.51mm (.217”) all the way to 5.66mm (.223”), so it is impossible to design one slug that works in all barrels. The same applies for .25 and .30. To make things even more confusing, most airgun barrels are choked and the choking can be extremely inconsistent from barrel to barrel. This isn’t an issue for pellets, which have a skirt that expands and forms to the shape of the barrel, but slugs are way more sensitive. Many people would try slugs and immediately give up after discovering that their barrel doesn’t like them at all. The solution? Design a standardised barrel to shoot a standardised diameter. 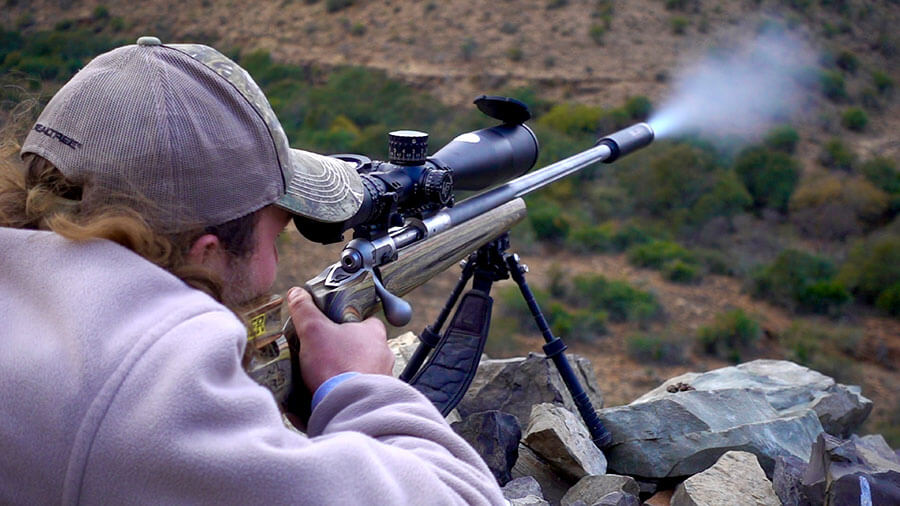 In the world of Long Range shooting, Ballistic Coefficient is KING.

I would like to think that I was the pioneer of “mainstream” small bore slug shooting, but it would probably be unfair to claim that. I know for a fact that my efforts have helped greatly though, and of that I am very proud. In 2016 when I began to get more into long-range firearm shooting, one fact stood out above the rest: Ballistic Coefficient is KING. This was a commonly-known fact amongst long-range shooters. This didn’t sit well with me, because I could clearly see that it was possible to shoot high-BC bullets that were both aerodynamic and precise – Why was the Airgun world so content to sit back and accept the horribly low Ballistic Coefficient of diabolo pellets? If a rimfire could shoot lead bullets accurately, why couldn’t an airgun?

You could say also that necessity was the main driving factor behind this passion to advance. In South Africa where I live, we are limited to calibers under 5.6mm. This means that in order to try achieve what my friends over in the US were achieving, I had to think out the box. How can I somehow raise my Ballistic Coefficient without increasing caliber? I knew for a fact that my .260 Remington gave me superior ballistic performance to many larger calibers purely based on the fact that it shot longer, sleeker, more aerodynamic projectiles. That was the answer.

There were signs that the industry was ready for a big shake-up. We began to see airguns that could be both powerful and efficient, and shooters began opting for the heavy-for-diameter pellets like the JSB King Heavy and Monster Redesigns. The word “Ballistic Coefficient” began to be thrown around more, but I realised that most people had no idea just how poor the BC of even the heaviest diabolo pellet was compared to a lightweight slug with a superior shape. In early 2017 I made the bold prediction that the next big step in airgun technology would be the projectiles, and from that point on I made it my mission to help advance the industry forward.

Enter FX Airguns. In late 2017 I met with Fredrik Axelsson, president of FX, to discuss the idea of building a shooting system around a particular slug diameter. After only being able to achieve a 6” group at the 40 Meter indoor range with some sample slugs I was sent, I was a little embarrassed and Fredrik was convinced that my idea was going to be a flop. But to his credit, he let me run with my dream and even paid for three or four return flights from South Africa over the following few years as we began to learn more about the twist rates, rifling profile and land/groove diameters that seemed to work best. We settled on a .217” and .218” diameter as the slug size that we’d build the barrels around, and began to make progress little by little, eventually getting to the point where we could keep groups under 1/2” and sometimes even 1/4” at 40 meters – We were finally able to achieve pellet precision repeatably with every barrel that came off the machine, and introduce tighter tolerances to ensure that the end user would not have to test 3 or 4 different diameters.

We learned many things during this time that I didn’t share with anybody. We learned what the best lead formula was, we learned which lube worked best. We learned where the sweet spot was between precision and BC in terms of meplat, ogive and base design. At the time, JSB and H&N were starting to show interest in the slug concept, and asked me many questions. I shared some information with them, knowing that better availability & pricing of slugs was a good thing for everyone, but kept many secrets to myself. In the background, I continued to experiment with different shapes and weights. We FINALLY had slugs going mainstream, with FX having shown the world that it was possible to build a setup that could shoot high-BC projectiles both accurately and efficiently, and long-range shooting jumping to a whole new level globally amongst small bore PCP shooters. It was a dream come true for me!

Meanwhile back in South Africa, I had noticed a new YouTube channel pop onto the radar and decided to pay the Air Hunters a visit in Cape Town. At the time, they had around 1000 subscribers and had never experienced slugs before. Well… they had, but as with most people trying slugs for the first time, they were having a very frustrating time trying to find a gun/barrel/slug combination that actually worked. When I showed up with my slug liners and high-quality swaged .217” slugs, their eyes were opened and they haven’t looked back to this day! There was still one problem though: Cost. Slugs in South Africa are so shockingly expensive, and this made it impossible to justify buying them locally.

Roelf Vorster and I decided to manufacture some slugs ourselves to save cost in the long-run, and went through 6 different swaging dies from 5 different countries before finally settling on the one we felt was best. We began experimenting with different shapes, weights and diameters, testing them with high-speed cameras, doppler radars, and on live animals. We met with some extremely experienced ballisticians like Bryan Litz of Applied Ballistics, and discussed different factors that we took into account. Roelf’s passion for physics and his experience with computer analysis & simulations helped tremendously here – Instead of having to work on hunches and order expensive tooling every time we wanted to test a new design, we were able to design a shape in 3D to exact specs and run it through airflow simulations to determine how it would perform at different velocities and in different conditions. Subsonic and Supersonic are two totally different ballgames – “pointy” is not always better, and we were able to find shapes that would work at very high velocities and remain stable in severe turbulence. We eventually settled on a design that we felt gave us the ultimate balance of all the factors we needed: Low friction for increased efficiency, deep tapered hollow point for violent and controlled expansion, and a perfectly sized meplat that allowed the edges to form cleanly and gave us rapid expansion without sacrificing Ballistic Coefficient. This was the design that would later become the Javelin.

With a huge amount of expensive equipment purchased, Roelf and I began to quietly sell slugs to try cover costs. We never did any marketing, and I actually stopped making slugs to sell as soon as I’d paid off my equipment. Roelf however saw how big the market was becoming, and after extremely positive feedback from his customers he decided to take things more seriously. With Patriot Outdoors beginning to form, the FX distribution secured and big plans for a massive store and shooting range, we saw the perfect opportunity to scale things up in a big way. Patriot Outdoors decided to invest towards machinery, employees and materials, and seeing the project starting to take off I decided to jump on board, contributing to the process. With a healthy R&D budget, I knew Roelf and I would be kept busy!

Our slugs continued to become better & better as we constantly made small improvements.
Left: 5 shots at 100 Meters. Right: 40 Meter groups at the FX range.

For the past year we have been working extremely hard behind the scenes on scaling up production without sacrificing quality, and are proud to be able to bring what we feel are some of the best slugs in the world to retailers all over the globe for reasonable prices. And of course, we practice what we preach – All the slugs you have seen Gerhard, Roelf and myself shooting on our YouTube channels over the past year (including the 200m+ shots and the ‘explosions’ of all those poor sparrows) have all been made using Javelin slugs – Some would say the proof is in the pudding, but we like to say that the ‘proof is in the poof’. 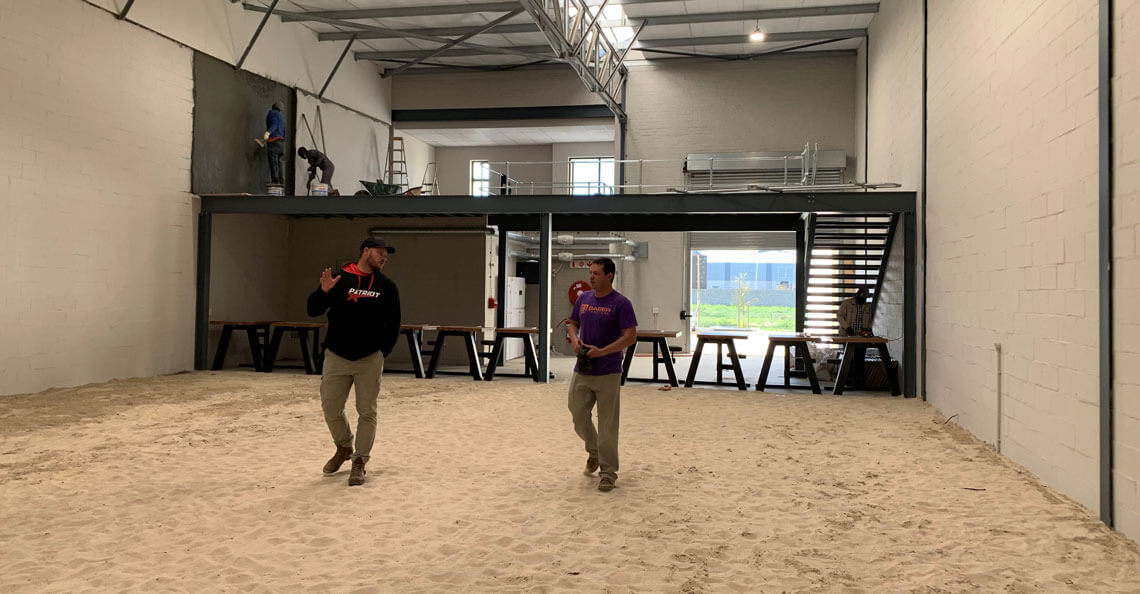 Our indoor range at the Patriot factory allows us to test new batches of slugs as they are made!

With my dream of ‘bringing affordable, accurate small bore slugs to the mainstream market’ becoming more real and personal than I ever imagined, it brings me much joy to finally be able to announce this project publicly as I continue to work alongside close friends, in a state-of-the-art premises, in the country I love. You can visit our shop and public range in Cape Town, or check out one of our global dealers near you for more information. Shoot Further. Hit Harder!

Join our Awesome Community. Follow us today on Social Media.

and so much more.

Join our Awesome Community
Follow us today on Social Media

Join our Awesome Community. Follow us today on Social Media.

and so much more.

Join our Awesome Community
Follow us today on Social Media

Contact us for full product details, stock availability and price. Photos are for illustration purposes only. Physical products may differ from the photo.